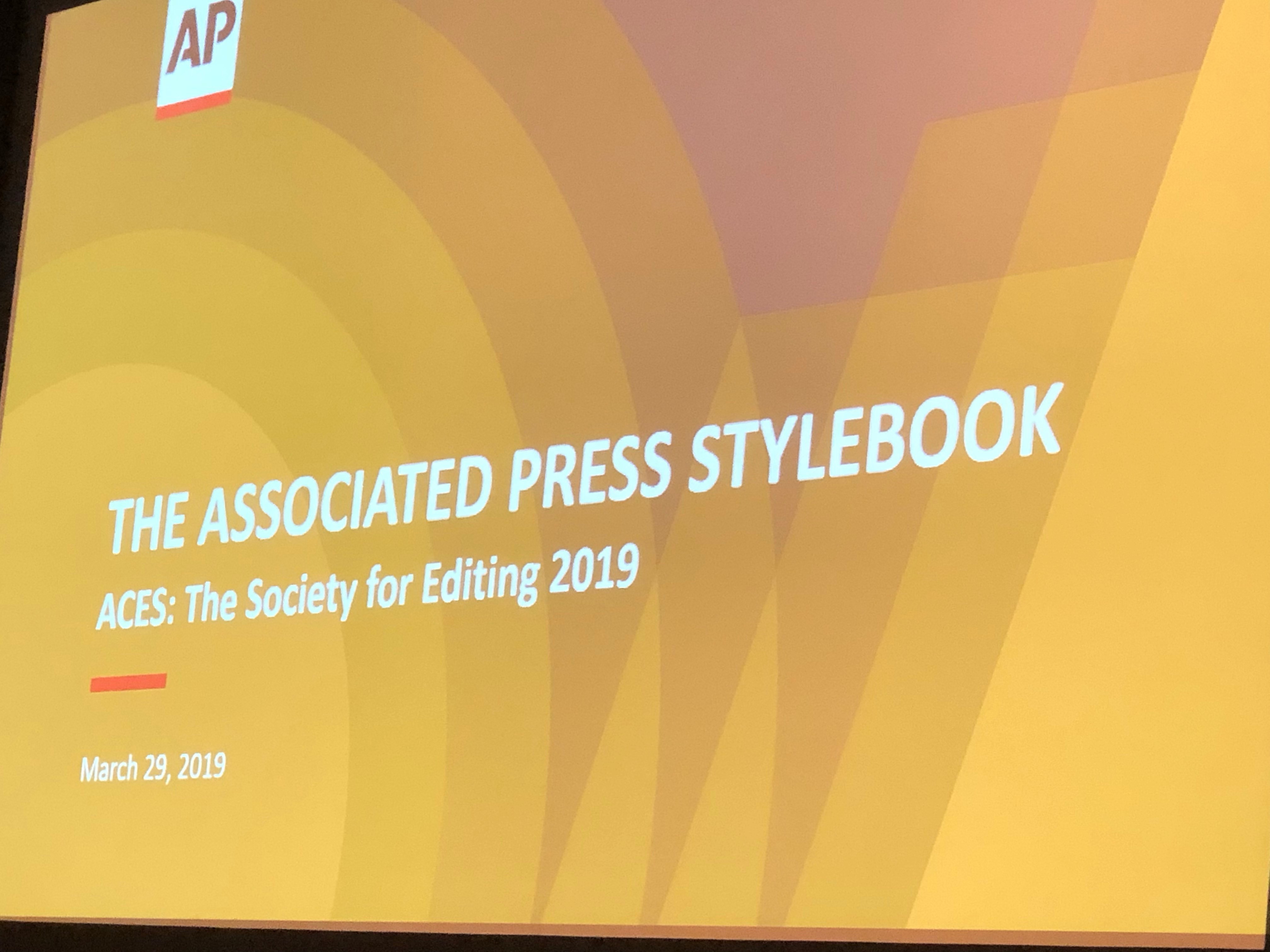 The Associated Press is adding a new umbrella entry to its stylebook called race-related coverage, lead editor Paula Froke announced Friday during the “What’s New in the 2019 AP Stylebook” session at the ACES national conference in Providence, Rhode Island.

Those topic-related entries led off a session in which the AP also announced changes to several punctuation entries, including allowing accent marks in names, moving from the word percent when paired with an amount to the % symbol, and expanding hyphenation guidance.

And a new entry says the word “data” generally should take a singular verb and pronoun. So it is “the data is.”

The new umbrella entry on race-related coverage starts with general guidance and adds several new entries. One covers use of the term “racist/racism.” Another covers the terms “people of color” and “racial minorities.”

An entry in the section covers guidance not to use the terms “blacks” or “whites” as plurals. And the AP has dropped the hyphen from dual-heritage terms such as African American and Asian American.

The new stylebook also offers more guidance on using the name of a specific Native American tribe whenever possible and on using the term “Latinx.”

“We got good feedback,” Froke said. “But it’s safe to say even within certain organizations there’s no consensus about some style issues.”

Froke said the AP is not necessarily done with entries in the race-related coverage section. And she also said she knows there will be feedback on some issues.

“Our first audience is journalists, but the audience is very broad,” Froke said. “We have to try to strike a balance.”

The section now says: “Consider carefully when deciding whether to identify people by race. Often, it is an irrelevant factor and drawing unnecessary attention to someone’s race or ethnicity can be interpreted as bigotry.”

One of the biggest discussions among the editors was about advice on when to use the term “racist,” she said.

“That was fraught, and that was why we went out of our way to encourage discussion” on using the term, Froke said.

That new entry, in total, says:

racist, racism Racism is a doctrine asserting racial differences in character, intelligence, etc., and the superiority of one race over another, or racial discrimination or feelings of hatred or bigotry toward people of another race.

The terms racism and racist can be used in broad references or in quotations to describe the hatred of a race, or assertion of the superiority of one race over others. The townspeople saw their votes as a rejection of racism.

Deciding whether a specific statement, action, policy, etc., should be termed racist often is not clearcut. Such decisions should include discussion with colleagues and/or others from diverse backgrounds and perspectives. In the AP, that conversation should also include senior managers.

In general, avoid using racist or any other label as a noun for a person; it’s far harder to match the complexity of a person to a definition or label than it is a statement or action. Instead, be specific in describing the person’s words or actions. Again, discuss with senior managers, colleagues and others from diverse backgrounds when the description may be appropriate for a person.

If racist is not the appropriate term, give careful thought to how best to describe the situation. Alternatives include racially divisive, racially sensitive, or in some cases, simply racial. For details, see racially charged, racially motivated, racially tinged, and other entries in race-related coverage.

Froke said the editors did not discuss whether to capitalize black. But there was a long discussion of using “blacks” and “whites” as nouns.

The new AP guidance says, “Do not use either term as a singular noun. For plurals, phrasing such as black people, white people, black teachers, white students is often preferable when clearly relevant.

“Black and white are acceptable as adjectives when relevant.”

“No one could answer why it isn’t OK to say ‘blacks,’ but it’s OK to say Jews or mothers, etc.,” Froke said. “But the idea is that it reduces people to a color.”

Headlines present a different problem, though, so the entry allows for the use when needed for space.

“We ultimately came down to the middle ground,” Froke said.

In stylebook announcements unrelated to the race-related coverage entry, some of the changes were related to things that were previously issues for transmission reasons.

For instance, the move to using % instead of “percent.”

“We did test it before we came to a decision,” Froke said. “And we wanted to make sure in numbers-heavy stories it didn’t look junky.”

Transmission problems often were the answer to why the AP didn’t use accent marks and diacritical marks in names. Now the stylebook allows such marks when people request them or in quoting directly from a language that uses them.

“Our technicians think it won’t cause problems,” she said.

Froke said that sometimes the AP gets accused of making changes to be arbitrary. But there is a reasoning behind everything.

For instance, related to new guidance that no hyphen is needed if the modifier is commonly recognized as one phrase, such as “chocolate chip cookie” and “third grade teacher,” Froke said she kept track throughout the year of hyphenation questions submitted to “Ask the Editor,” and if something came up multiple times, they addressed it.

She admitted that many will pause over removing the hyphen in “third grade teacher,” “first quarter touchdown” and similar constructions.

The AP also no longer calls for hyphenations in double-e combinations like reelect, preempt and reenactment.

Often, the angst over style changes is rooted in having to do something a different way, Froke said.

Froke acknowledged that the number of changes this year is a lot more than last year. But she didn’t know how many more pages would be in the next stylebook.

One reason is because the editors also took out several outdated entries covering things that no one uses.

A full list of AP Stylebook changes is available as a PDF.