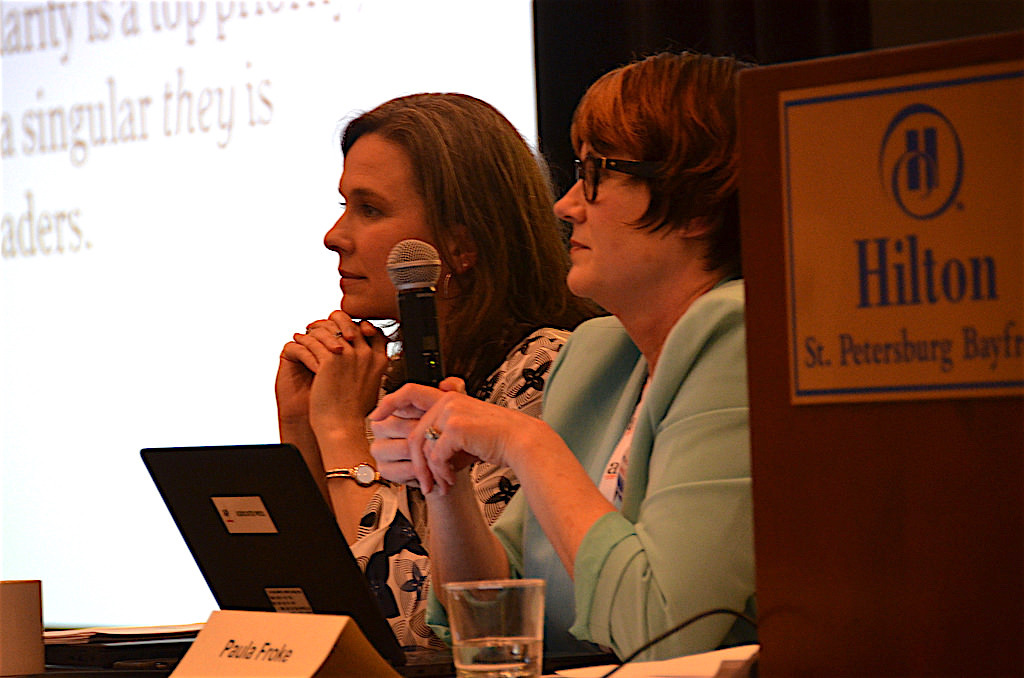 The Associated Press Stylebook says it is “opening the door” to use of the singular they.

A new stylebook entry, which was announced Thursday as part of the AP’s session at the 21st national conference of ACES: The Society for Editing in St. Petersburg, Fla., for the first time allows use of they as a singular pronoun or gender-neutral pronoun.

“We stress that it’s usually possible to write around that,” said Paula Froke, lead editor for the AP Stylebook. “But we offer new advice for two reasons: recognition that the spoken language uses they as singular and we also recognize the need for a pronoun for people who don’t identify as a he or a she.”

The new entry in the stylebook starts:

They, them, their In most cases, a plural pronoun should agree in number with the antecedent: The children love the books their uncle gave them.They/them/their is acceptable in limited cases as a singular and-or gender-neutral pronoun, when alternative wording is overly awkward or clumsy. However, rewording usually is possible and always is preferable. Clarity is a top priority; gender-neutral use of a singular they is unfamiliar to many readers. We do not use other gender-neutral pronouns such as xe or ze.

That’s compared to the AP Stylebook’s previous “their, there, they’re” entry, which read: “Their is a plural possessive pronoun and must agree in number with the antecedent. Wrong: Everyone raised their hands. Right: They raised their hands. See every one, everyone for the pronoun that takes singular verbs and pronouns.”

Froke said clarity is key when using they as a genderless pronoun.

“We specify that you need to make clear in the context that the ‘they’ in question is just one person,” Froke said. “We don’t, among our own staff, want to open a floodgate. But we recognize a need for it, so we want to open it a bit.

“The whole issue is difficult. We worked very hard to come up with a solution that makes sense.

"Clarity is the top priority. Our concern was the readers out there. Many don’t understand that they can be used for a singular person.”

But Froke also acknowledged that in speech, they is often used as singular.

“I write it naturally sometimes, too, and then have to go back and change it,” she said.

The style entry notes that when "they" is singular it takes a plural verb.

Colleen Newvine, product manager for the AP Stylebook, said people don’t have to use they as singular but “if you find it best, it’s allowed.”

Froke said the stylebook also has added or adjusted several other entries related to gender.

“We have a new umbrella entry on gender and sex, noting that not everyone falls under one of two genders,” she said. “That particular entry also notes that language around gender is evolving. Because this language is ever evolving, newsrooms and organizations outside of AP may have to make their own decisions.”

The LGBT entry* in the stylebook has been updated to now read LGBTQ.

And the stylebook has an updated entry on phobia. Previously, the entry read, “An irrational, uncontrollable fear, often a form of mental illness. … Do not use in political or social contexts: homophobia, Islamophobia.”

The update says it is acceptable to use “phobia” in broad references such as homophobia and xenophobia.

In a punctuation matter that comes up often at ACES events, the new stylebook does include a clarification in the comma entry.

Froke said the beginning of the punctuation section in the stylebook has noted that serial commas are acceptable when you need them for clarity. That advice has been moved to the actual comma section, for more clarity.

“The stylebook doesn’t ban the use of a serial comma. Whether you put it in at all times is a different debate.”

Newvine said the new printed stylebook will be available May 31 but changes announced during the ACES session become official Friday and will be in the online style guide prior to May 31.

Other new or rewritten entries announced include:

There is also now an entry for Indigenous Peoples Day and a change in the spelling of “kimchi” (from “kimchee”). Froke said the stylebook got a lot of feedback on that one on its Twitter account, @APStylebook.

Newvine also noted the new stylebook website, which went live everywhere on Presidents Day weekend. She said a survey of users indicated a desire among users for a revamp of the online style guide and better search functionality.

Newvine said there had been cosmetic improvements on the website over the years but the new website was a complete rebuild.