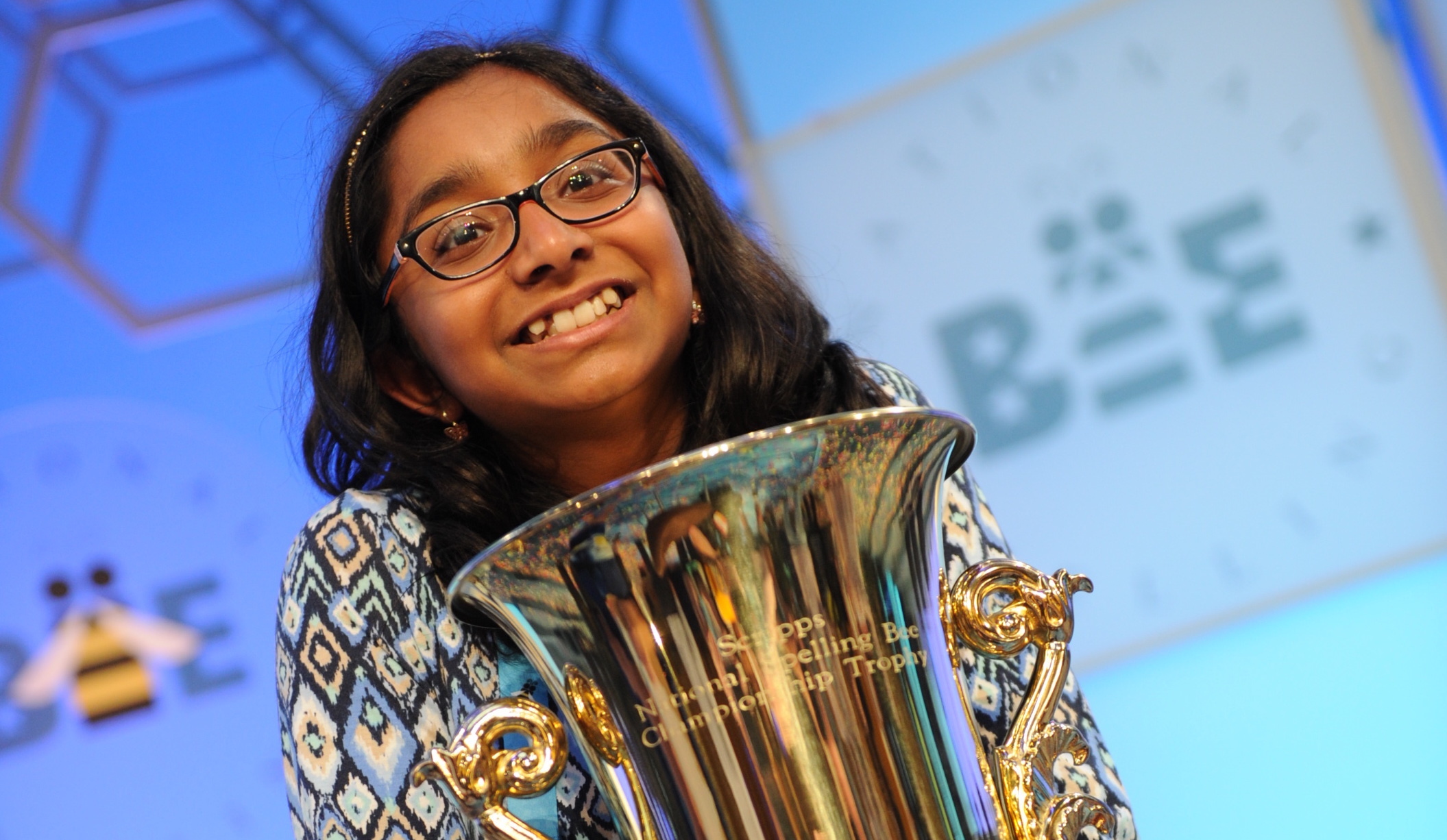 The night I spelled worse than a middle schooler: A copy editor's time at the Scripps National Spelling Bee

“Tayr-uh-goit-ee-us,” said Dr. Bailly during the 10th round of the 2017 Scripps National Spelling Bee. I took pen to paper and gave the word a shot. I wrote: “terragoitius.”

By now I was so exhausted that it wasn’t worth it to try too hard. I knew I was wrong. “Terra” has to do with land, but this word refers to a muscle, according to the definition uttered by the familiar voice of Jacques Bailly — aka Dr. Bailly — the bee’s official pronouncer since 2003.

And so went my night at the Scripps National Spelling Bee on June 1, 2017, at the Gaylord National Resort and Convention Center in Maryland. Me, a professional copy editor, outspelled by one middle schooler after another.

My evening hadn’t started out with so much failure. Arriving early, I came upon a small mock stage set up outside the ballroom where the real competition would soon take place. A trio of college students volunteering at the bee asked me to take to the mock stage and try my hand at spelling. I obliged.

“Could I please have the definition?” I asked, stalling. The student read aloud the dictionary’s definition.

“What’s the language of origin?” I asked next (might as well learn as much about this word as I can). The student provided me the etymology.

“C-i-n-n-a-m-o-n,” I said into the microphone, which wasn’t turned on at this mock stage.

Relief swept me. But now I was presented with my second word: ate-lander (or at least that’s what it sounded like).

I asked for the definition: a foreigner. The language of origin: Afrikaans.

“Great. How do I spell ate/eight in a Dutchy kind of way?” I asked myself. “Eit?”

I decided to go with a straightforward spelling: a-t-e-l-a-n-d-e-r.

I dismounted the mock stage and was handed gifts: a tiny plastic trophy for “cinnamon” and a pack of bee-themed tissues to console me for “ate-lander.”

My proof: the giant tub of foam alphabet blocks. The boys were doing what you would expect boys to do: throwing the blocks at one another. My mind flashed back to all those annoying boys from middle school. One boy pegged a girl in the shoulder with a block. “Ow!” she cried out in fake pain.

“Are you all competitors?” I asked two boys and a girl who were goofing off in and around the tub.

“I just messed up spelling ‘ate-lander.’ Do you all know that word?” I asked, expecting them to pause or ask me to restate the word.

My waterloo was their cakewalk.

A few hours later, deep into the competition, I accepted that my decade-plus of copy editing experience was no match against the middle schoolers in the ballroom. I wasn’t embarrassed; I was proud of these kids. They love learning. They persevere. They practice the life skills we all need in order to be successful as adults.

I delighted at the competitors’ remarks. “Very interesting. Who makes these?” asked Raksheet Kota when Dr. Bailly lobbed “bautta” at him. “Weird. Why this word?” asked Shourav Dasari, shortly before misspelling Struldbrug (“one of a class of imaginary persons who can never die but who are declared dead in law at the age of 80 and live on wretchedly at state expense”).

My mind started going numb during rounds 17 to 35, when only two spellers, Ananya Vinay and Rohan Rajeev, remained. I was lucky if I could spell enough of the letters to even be able to look up the words at unabridged.merriam-webster.com. I started wishing I knew more about French phonics.

Finally, 12-year-old Ananya of Fresno, California, came out on top in round 36 with “marocain.”

Confetti blasted. I closed my notebook and shut my laptop. I had been outspelled by a room full of middle schoolers — and it felt so good.

(Preeti Aroon is a copy editor for National Geographic and formerly copyedited at Foreign Policy. Comma splices and lowercasing “Is” in headlines really annoy her. Please follow her on Twitter: @pjaroonfp.)