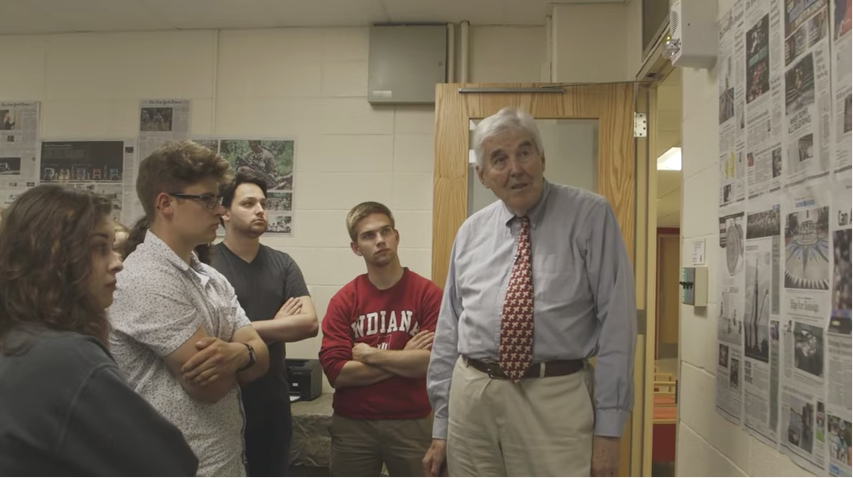 "The editing process is as important as air, in my book."

A new short film marks the 50th anniversary of the Dow Jones News Fund's editing internship program and the 50 years that professor Edward Trayes has led the DJNF editing program at Temple University.

"Celebrating Dr. Ed Trayes and 50 Years of Editing Excellence" was commissioned by Terry O’Toole, a 1979 intern at The Wall Street Journal and co-founder of The O’Toole Family Foundation with his wife Polly.

Linda Shockley, DJNF managing director, said, "The film is undeniably a tribute to Dr. Trayes but it also underscores the importance of editing to accuracy, fairness and credibility in media."

Trayes was a key instructor of the DJNF's first copy editing program at Temple University in 1968. Nearly 2,700 students have completed a DJNF editing internship and Trayes has trained almost 700 of them.

The film features Dean David Boardman of the Klein College of Media and Communication at Temple University and William G. Connolly, formerly of The New York Times and a former board member of ACES. It also feature alumni of the program, such as Joshua Barone, the 2011-12 ACES Aubespin Scholarship recipient.

The Dow Jones News Fund (then called the Dow Jones Newspaper Fund) was the inaugural winner of ACES' Glamann Award in 2007. DJNF was honored for supporting journalism and editing.

Trayes accepted the award for the fund. As that year's ACES conference keynote speaker, he talked about the power of copy editors and their enduring presence and future, no matter how the industry changes.

This summer DJNF trained and placed 85 interns for newsrooms across the country: 28 editing, 28 business reporting, 18 data and 11 digital.

(Some information for this story came from the Dow Jones News Fund.)