March 26, 2014 • By Frannie Sprouls, University of Nebraska-Lincoln • Contests and Awards

The last two spellers, Lisa McLendon and Amy Goldstein, waited for the next word at the front of the room Wednesday night.

“Are you starting to run out of words?” someone asked, and the audience laughed.

“We’ve got a whole dictionary,” Merriam-Webster’s own Peter Sokolowski said before reading out “ricochet” for McLendon to spell.

Only six words were left on Sokolowski’s first list when Goldstein successfully spelled “mountebank” and “insouciance” after McLendon misspelled “bourgeoisie.”

There were jokes all around at the ACES Education Fund Spelling Bee on Wednesday night. Sokolowski led the event along with Corrie Loeffler, program manager for the Scripps National Spelling Bee, and the Washington Post’s Bill Walsh.

The spelling bee had one twist, ACES Education Fund President Merrill Perlman told spellers and the audience. If stuck on a word, the speller or an audience member could pay $1 to get the next letter, with a limit of $2 per word.

Not exactly bee kosher — but it suited the purpose of the event. All proceeds are going to the ACES Education Fund, which awards scholarships each year to aspiring editors. Spellers paid $25 for the chance to pit their letter knowledge against others, and audience members paid $10 to watch, laugh and heckle.

With a dozen spellers, about 40 people in the audience and a couple of spellers taking the mulligan, the bee spelled success for the Education Fund — and $831 was raised.

Of the 12 contestants, two were former Scripps National Spelling Bee participants: John Russial and Goldstein, who also is a past ACES scholarship winner.

Russial’s calm demeanor during spelling kept him in the competition until the 10th round.

“$75 to eliminate him!” Perlman called from the back during the fifth round, and the audience laughed.

He took his time spelling his next word, kaleidoscope, and kept his eyes on the back of the room where Perlman was. But a couple rounds later, Russial was out.

After almost 19 rounds of back and forth between McLendon and Goldstein, it was Goldstein who won.

“I was having fun at that point,” she said. “I was thinking to slow down spelling in my mind and make sure the letter appear in sequence.”

Goldstein walked away with Merriam-Webster’s Unabridged Dictionary, a Kindle Fire, a “real acrylic crystal” trophy and a Scripps goodie bag. 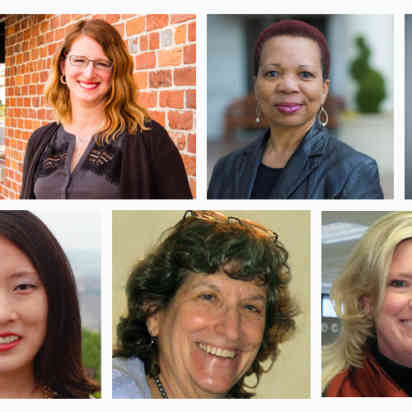