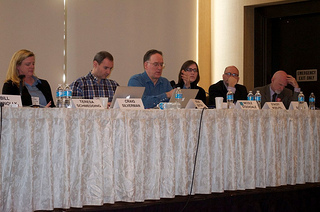 Plagiarism summit: It’s all about trust

Fighting plagiarism and fabrication in the media should start in the newsroom and before that in the classroom.

Representatives from 10 journalism organizations and members of the task force that studied the issue gathered Friday morning during the National Summit to Fight Plagiarism and Fabrication to answer questions about how to make that happen.

It starts with individuals.

“Tell the audience what you know, how you know,” said Henry Fuhrman, assistant managing editor at The Los Angeles Times. “Fighting plagiarism is about attribution. The Golden Rule of attribution is attribute to others as you’d like to be credited for your work.”

The task force created an e-book, “Telling the Truth and Nothing But." Now the job is to get the e-book and best practices out into the newsrooms and journalism schools, panel members said.

Part of the best practices have to be about how newsrooms respond to acts of plagiarism.

The panel proposed a graduated approach to consequences of plagiarism, and said it requires a clear and widely disseminated policy.

“No plagiarism is ever intentional according to the perp,” said Nancy Sharkey, a professor of practice in the School of Journalism at the University of Arizona, “so intent is not a helpful factor in response.”

“There are degrees, but there’s no minor plagiarism,” said task force member Steve Buttry director of community engagement and social media for Digital First Media and Journal Register Co. “But there needs to be degrees of punishment. We don’t always need the death penalty.”

Buttry called for news organizations to educate the community about ethics to build trust for the media and for media members to be transparent in their standards.

“Be the voice of originality in community, not just in newsroom,” Buttry said.

An organization’s ethics polices should be easily accessible to the staff, profession and the community, Sharkey said.

Several members of the panel said after educating journalists about best practices, we need to education the public.

“Currency is content. There is no substitution for losing integrity,” said Hugo Balto of the National Association of Hispanic Journalists. “First be right, then be first. Citizens don’t consume news in same way we (journalists) do.”

Stacey Woelfel of the Radio and Television News Directors Association was among several panelists that noted that the amount of news provided to the public has increased, with the same or smaller sized staff doing more work. That increases the pressures and leads to the type of sloppy work that leads to plagiarism.

That also means journalists need to come in with a set of ethics. Those ethics concerning plagiarism should be taught in college and even before, the panelists said — noting an increase in academic dishonesty in college.

A portion of the solution to fighting plagiarism and fabrications lies with news organizations providing resources and making sure sloppy practices aren’t tolerated.

“Trust is foundation to absolutely everything we do,” said Jim Slusher, assistant managing editor for opinion at the Daily Herald in Arlington Heights, Ill. “Remember that at the root we need to be asking ourselves if people will trust us.”

Editor’s note: An earlier version of this story attributed a quote about smaller publications and start-up organizations being less able to take trust hits to Dylan Smith, editor and publisher of TucsonSentinel.com and chairman of the board of the Local Independent Online News Publishers. The comment was made by an audience member, not Smith.